Subscribe to the Daily Intelligence for your daily dose of career intel, defense contracting and security clearance news.

The recent reveal of the beluga whale with the Russian video harness has captured the attention of the world, as Norway sorts out from where this friendly creature of a few thousand pounds escaped. Odds are, the whale was part of an underwater sea surveillance effort from within the Russian naval base  in Murmansk, Russia. The Murmansk region shares both border and sea with the Finnmark region of Norway, where the whale was discovered.

While lighting up the news cycle — after all it isn’t every day a 1.5 ton pure white creature of the sea saddles up to a Norwegian fishing boat — the use of undersea mammals for military and intelligence purposes has been ongoing for more than 50 years, with recorded instances dating back to World War II.

Espionage Under the sea

This particular whale was found wearing a harness, with nomenclature associating it with St. Petersburg, Russia. The provenance of St. Petersburg as the place where the harness may have been made makes sense, as all things naval have a large footprint in St. Petersburg, including the Admiralty Shipyard, which builds Russian submarines. 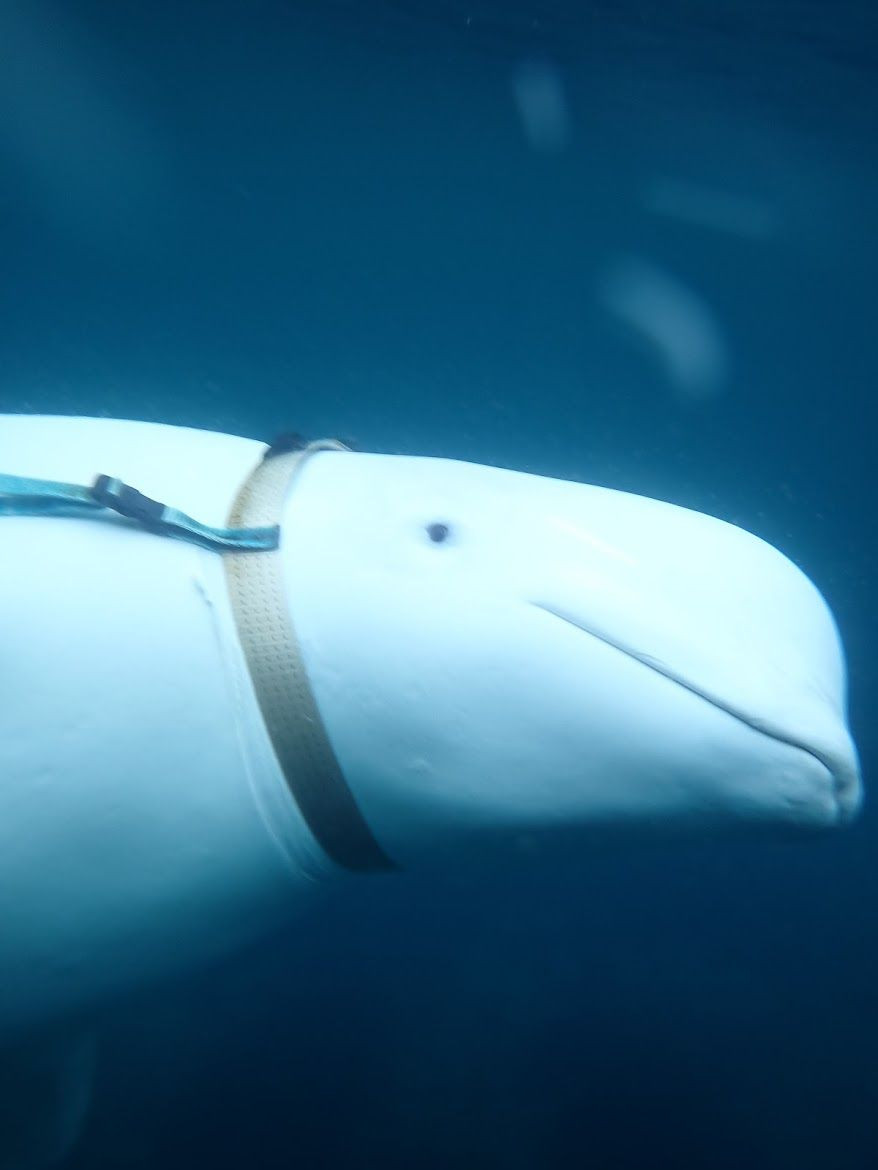 The harness, photographed by the Norwegians, was equipped with a mount for a Go-Pro camera. Further research shows the harness is identical to one shown in a February 2018 video on Russian television. In the video, a sea lion is wearing the harness, and is seen working with a naval diver with the harness is attached to a tether.

Is this really new news, or just new to many of us?

The research being conducted in Murmansk has been ongoing there since 1984, according to the Russian video.  And while Hollywood has taken the training of dolphins and other creatures of the sea to the ultimate, the reality is both the United States and Russia use sea mammals for a variety of tasks both defensive and offensive.

For example, in July 2018 the United States Navy shared how the Mark 7 Marine Mammal System (MMS) was being trained out of San Diego for the purpose of mine countermeasures. The dolphins were trained to detect and mark undersea mines which could then be neutralized. In the described training exercise, the dolphin located and marked a training mine on the seabed within 30 minutes of being deployed.

In 2010, Naval Base Kitsap-Bangor, home to U.S. nuclear submarines, had dolphins and sea lions deployed 24/7/365 performing defensive surveillance for the naval base. The base, within the famed Hood Canal, is of high interest to adversaries of the United States.

The US Navy Marine Mammal Program

Stepping back in time, in 1960, the Marine Mammal Program within the U.S. Navy was established. The mammals, both beluga whales and bottlenose dolphins, were used for guarding boats, submarines, and conducting underwater surveillance with cameras carried in their mouths. For many years, the program was classified.

At its peak during the Cold War in the 1980s, the U.S. Navy’s program included over 100 dolphins, beluga whales and sea lions with an operating budget of close to $8 million.

Not surprisingly, the then Soviet Union was conducting parallel research.

Why the Beluga whale?

The beluga whale can dive deeper and survive in colder water than sea lions or dolphins. For this reason, they are the mammal of choice for the frigid Arctic climate. The Russians would prefer their submarines deploying out of Murmansk could do so without detection. Beluga whales equipped with surveillance apparatus, to include cameras, can provide advance notice of the resources of other nations in proximity to the projected path of the Russian submarines.

Norway now has a Russian trained asset, the beautiful white beluga, which has apparently defected. If allowed to find its own way, it might head back to Murmansk or make like Free Willy and enjoy retirement in the west.

Intelligence
Espionage for the 21st Century
Christopher Burgess (@burgessct) is an author and speaker on the topic of security strategy. Christopher, served 30+ years within the Central Intelligence Agency. He lived and worked in South Asia, Southeast Asia, the Middle East, Central Europe, and Latin America. Upon his retirement, the CIA awarded him the Career Distinguished Intelligence Medal, the highest level of career recognition. Christopher co-authored the book, “Secrets Stolen, Fortunes Lost, Preventing Intellectual Property Theft and Economic Espionage in the 21st Century” (Syngress, March 2008). He is the founder of securelytravel.com