The federal government typically employs over 2 million people at any one time and it has held around that figure for the last four decades. In 1978, it employed 2,053,139; as of the end of February 2019, the total employed was 2,050,936.  Of this number, about 85% are employed in locations outside of Washington, D.C; 36% of these employees live in rural areas. 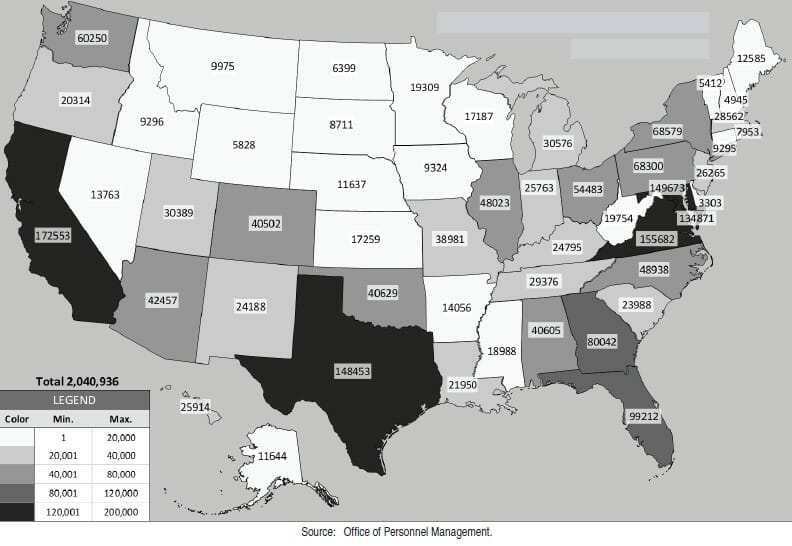 The rest of the states vary in federally employed populations from number eleven on the list – Illinois with 48,023 – to last state, New Jersey with 3,303 employees. Outside of support to the military, what are the primary agencies in each of the top states that that employ the lion’s share of federal employees? With the exception of Ohio, each state listed includes the two military-related agencies – the Department of Veterans Affairs (VA) and the Department of Defense (DoD) in their top six federal-employed agencies. The breakdown by state is: It is no wonder States vie to get federal agencies in their area. The federal civilian workforce spends approximately $350 million tax dollars annually to support the operations of its various agencies with much of that money staying in the local area. In addition, these are four more benefits of working for the Federal Government versus the private sector:

Because federal jobs are more stable than in the private sector, unemployment tends to fluctuate less. And with much of federal salaries staying in their local communities, these workers have more disposable income to spend locally. These two benefits make for more stable communities in these locales.

Sponsored
Getting a Job in Law Enforcement at Booz Allen

Government Contractor
With Benefit Cuts Looming, Some Federal Government Employees Plan Their Exit
Kness retired in November 2007 as a Senior Noncommissioned Officer after serving 36 years of service with the Minnesota Army National Guard of which 32 of those years were in a full-time status along with being a traditional guardsman. Kness takes pride in being able to still help veterans, military members, and families as they struggle through veteran and dependent education issues.