The Washington metro is waking up to the latest election news, but the reality is that regardless of who is in the White House, the Washington job market will remain strong, particularly for those in national security careers. In Washington, D.C., average total compensation is $107,808 compared to $88,915 in the rest of the U.S., according to the results of the 2020 ClearanceJobs Compensation Report. That sets D.C. cleared compensation apart as some of the highest in the nation.

The state and federal government dominate D.C. when it comes to cleared employers. The Naval Research Lab, U.S. Department of Commerce, Department of Justice (including FBI, Secret Service, and U.S. Marshals), and GAO are all top employers in Washington, D.C. proper. Government employees lead in the Washington, D.C. employment pool, with 26% of respondents in the ClearanceJobs compensation survey working directly for Uncle Sam, versus 13% in the rest of the country.

When it comes to job categories, Washington, D.C. cleared professionals are also more likely to fall into the Government/Military and Business/Finance job categories than IT and Engineering. As for compensation, D.C. boasts high pay for a highly educated workforce. More than a quarter of D.C. workers have advanced degrees, compared to 13% in the rest of the country.

Compensation for all clearance levels other than Secret and Public Trust topped six figures. Washington, D.C. had fewer respondents with a Secret clearance (21% versus 40% in the rest of the U.S.), but those respondents with a Secret clearance reported a significant drop in compensation from the 2018 survey. Job category may play a role in the dip, as D.C. has a higher percentage of Business/Finance and Intelligence respondents, versus IT and Engineering (which typically command higher salaries). Top Secret clearance salaries also saw a drop, but not as significant. Department of Energy security clearances continued a trend of increases, with a 15.47% increase from 2018. 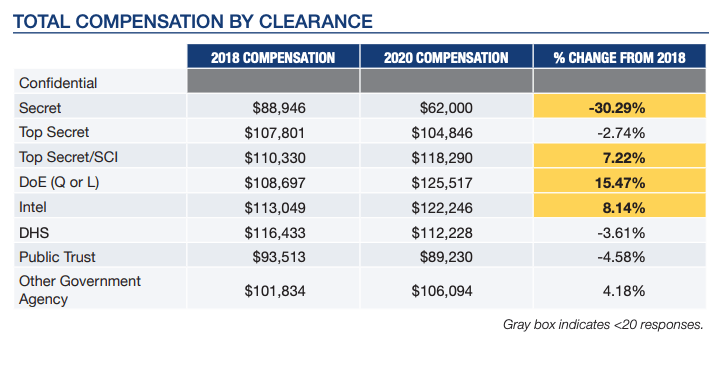 Experience is where salary differentials get serious with the pay spread between an entry-level and senior executive in Washington, D.C. a full six figures. Entry, early, and mid-career professionals saw the highest growth between 2018 and 2020 compensation survey figures with each career level noting 7% growth. Increases in entry and early career-level salaries also emphasize the push—and competition—for talent in Washington, D.C., particularly among government employers. Higher entry-level salaries also reflect the higher than-average education levels of Washington, D.C. employees. The average age in Washington, D.C. is 34, slightly younger than the national median age of 38. Candidates with advanced degrees can negotiate higher salaries within the general schedule, and also with contract employers. The government has worked to improve its ability to attract talent in recent years, including shortening time to hire and increasing direct hiring authorities for critical positions. Reducing time to hire is one step toward attracting entry-level talent to government careers, a hurdle particularly difficult for cybersecurity firms who also compete with Silicon Valley 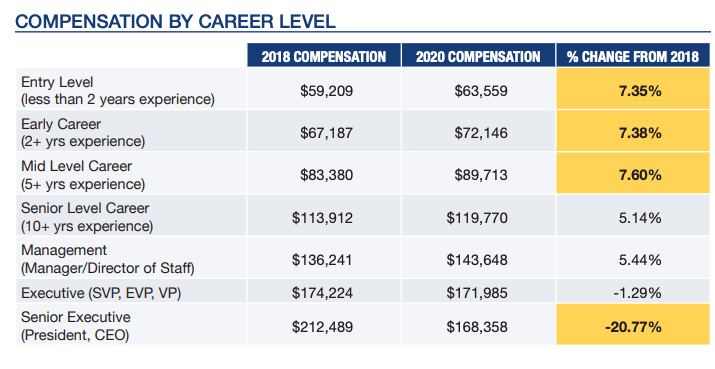 Information Technology and Software tops the compensation ladder in Washington, D.C., but at least two of the top five high-paying careers are very D.C. specific. The second highest-paid professionals are in Healthcare and Science. The U.S. Naval Research Laboratory is located in Washington, D.C. and employs more than 7,000. That makes it one of the city’s top employers. It has missions in nanoscience, ocean and atmospheric science, space technology, and more. The Centers for Disease Control and Prevention also have a Washington, D.C. office with ongoing needs for cleared science professionals. Rounding out the top three is Military and Law Enforcement, which skates just ahead of Aerospace and Aviation and Systems Engineering salaries. While law enforcement may not typically seem like a top-paying career, Washington, D.C. is a different animal. Federal law enforcement officers with agencies such as the FBI, Secret Service, and U.S. Marshalls can easily command six-figure salaries.

Job Search
Everything is Bigger in Texas - Cleared Compensation 2020

Job Search
Defense and Military Job Market in Seattle, Washington
Lindy Kyzer is the director of content at ClearanceJobs.com. Have a conference, tip, or story idea to share? Email lindy.kyzer@clearancejobs.com. Interested in writing for ClearanceJobs.com? Learn more here.. @LindyKyzer