Every region across the U.S. has its quirks, accents, and benefits. ClearanceJobs took a deep dive into compensation for cleared professionals in the U.S. Northeast, Southeast, Southwest, Midwest, and West based on the 2021 Security Clearance Compensation Report. Not only is it important get compensated for your work, but it’s important to like where you live – even if you don’t work remotely.

We are one country, but we have a lot of diversity in opportunities throughout the country. And depending on cost of living and talent demands, some regions compensate a little more. Although comparing by state is a good start, a look into the overall region can expand your options. The West is home to some of the bigger-known cleared career opportunities as well as hidden wonders. California has the nation’s largest number of cleared personnel, which makes it a critical market for cleared talent and defense jobs. A little farther east, and you’ll encounter several other critical clearance markets, including Denver and Colorado Springs and the Silicon Slopes and Utah Data Center (also known as the Intelligence Community Comprehensive National Cybersecurity Initiative Data Center).

When it comes to top employment, tech is king in the West, with Engineers, IT-Software, and IT-Security all cracking the top five highest paying fields and garnering salaries well above six figures. Six-figure salaries will stretch differently between Silicon Valley and the Silicon Slopes, but whether you’re in San Jose or Salt Lake City, a six-figured cleared salary remains competitive, and based on job and salary satisfaction figures, respondents in the West are making it work. Only four states make up the southwest region—Texas, Oklahoma, New Mexico, and Arizona. This breakdown works out because Texas is practically the size of a country- it’s gross state product is one of the largest in the world, ahead of Canada and South Korea. The Southwest is known for its dry, arid climate, which makes it a great region for the aerospace industry. For social life after work, there’s the Grand Canyon or the Gulf of Mexico or the Rocky Mountains, along with great golf and resort options. With year-round sunshine and a distinctive, pioneering spirit, the southwest region may be dry, but cleared careers are flowing. For service members getting reading to transition, the southwest is a great place for veterans to use their GI Bill and get experience outside the military while adding education that increases earning potential. The southwestern region is a magnet for veterans who support national security after their military transition, with 8% higher concentration of veterans than the national average.

Compensation in the Southwest is lower than the national cleared average of $103,199, coming in at $93,798, but so is the cost of living, with average housing prices and other costs decidedly lower than the East Coast or West Coast. You may think of the Midwest as the flyover states you pass through in traveling between major cleared hubs in Washington, D.C., California, or Florida. The midwest region includes North Dakota, South Dakota, Nebraska, Kansas, Minnesota, Iowa, Missouri, Wisconsin, Illinois, Michigan, Indiana, and Ohio. And many cleared professionals find the Midwest is best— with lower cost of living, shorter commutes, and strong career opportunities in great communities. In addition to major military hubs like Wright Patterson Air Force Base in Ohio and Offutt Air Force Base in Nebraska, the National Geospatial Intelligence Agency has a home in St. Louis, MO. For cleared professionals who don’t want to coast, the midwest region has a lot to offer in both diversity of career opportunities and compensation.

Average total compensation in the Midwest is $93,367, a more than 2% pay bump since 2019. Survey respondents noted personal performance as the leading reason for the compensation increases. 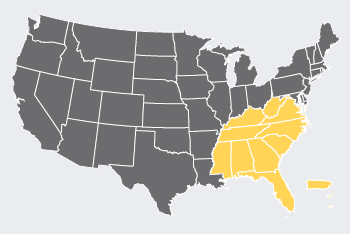 West Virginia, Virginia, Kentucky, Tennessee, North Carolina, South Carolina, Georgia, Alabama, Mississippi, and Arkansas, as well as Puerto Rico and U.S. Virgin Islands, make up the southeast region. The Atlantic coastline and Gulf of Mexico create cleared career opportunities in emergency planning, space, and undersea drones—making the cleared career opportunities as hot as the temperatures. West Virginia boasts the lowest average housing prices in the nation. In contrast, Northern Virginia has housing costs nearly three times the national average. Most cities in the Southeast land somewhere in between. The Southeastern region is filled with history, almost year-round comfortable weather, and cleared job opportunities. Whether the options are aimed at the blue collar worker, the help desk technician, or the data scientist, the region is rich with cleared opportunities and varied housing options. Work-life balance is not too far out of reach in the Southeast.

Average total compensation in the Southeast is $102,242. For an area that is continually attractive for businesses, while still offering moderate living prices (except for that one corner of Virginia), cleared candidates can find the best of all worlds down in the southeastern region. While a position in sales takes the top spot in the Southeast, IT roles in software and data science, as well as systems engineering, pay six-figure salaries. The northeast region starts in Maine, and works its way down through Massachusetts, Rhode Island, Connecticut, New Hampshire, Vermont, New York, Pennsylvania, New Jersey, Delaware, and ends in Maryland and the District of Columbia. Cleared careers are obviously hot in Maryland and D.C., but aerospace and research hubs in Connecticut, New York, and Pennsylvania mean cleared career opportunities span the northern region. While the Northeast is steeped in stability, that also means it’s a bit more button down than workplaces in the West or Southwest.

Average total compensation in the Northeast was $107,254. Although home prices average just over $200,000 in Pennsylvania, the rest of the region has consistently higher housing costs, creating a region that tends to compensate better than others in order to keep up with the cost of living.

Big contracts are big business and business sales professionals in the northeast ensure those sales happen. While many other regions saw IT positions sweep the top five, in the Northeast, business and program managers earn top dollar. Both positions play a critical role in a contractor’s ability to compete and earn new work. Jobs in systems engineering and IT roles in software and data science are well compensated for the time, education, and certifications necessary to be successful in those careers.

East, west, home is best, but sometimes, it takes a little exploring to find the right spot. If you have ever entertained moving to a different cleared hub in the country, it’s important to get a full picture of the region. You may move for one job, but you might wind up staying in the region for different reasons. The more opportunities there are, the less frustrated you may be if a job doesn’t pan out.

Cybersecurity
Cyber Security Breaches Pose National Security Implications
Jillian Hamilton has worked in a variety of Program Management roles for multiple Federal Government contractors. She has helped manage projects in training and IT. She received her Bachelors degree in Business with an emphasis in Marketing from Penn State University and her MBA from the University of Phoenix.