The UN pushed back against rumors this week that UN aid money was being processed through banks controlled by the Taliban-Haqqani regime. The UN mission in Afghanistan has long been the target of charges of mismanagement of money, and corruption in its own ranks and in its relations with corrupt Afghans. The latest charge by Afghans is that the $40,000,000 in cash that has been arriving quite regularly for many months is ending up in the terror regime’s hands and not reaching those in dire need. It does not help the UN’s case that when the Taliban-Haqqani controlled bank shows photos of pallets of cash every time it arrives and claims it has access to the money.

While the UN calls the Taliban’s central bank comments “misleading and unhelpful,” they are a bit less clear when they explain where the cash goes. The UN said the money comes into the country and goes into a private bank. They further explained that the funds are then directly moved to “UN entities” and “a small number of approved and vetted humanitarian partners in Afghanistan.” 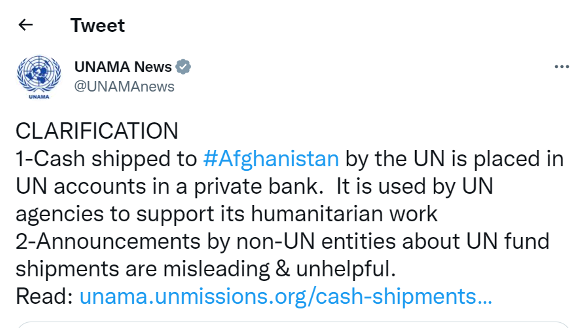 The UN stated that no money is placed in the regime-controlled central bank or given to the terror regime itself. Afghans on the other hand have provided details this week about how the Taliban-Haqqani regime indirectly gets access to the aid money and how the terrorists keep tabs on how the money is moving around the country so they can steal or misuse it.

The 65 missions being monitored by the terror regime included operations by the Indian Embassy, UN OCHA, UN WPF, UNHCR, UNAMA, UNDP, The HALO TRUST, UNICEF, the WHO and others. The names of every GDI member (General Directorate of Intelligence) observing and manipulating the missions was also noted in the report.

Throughout the humanitarian effort process, the Taliban-Haqqani’s GDI is involved. In some cases, they attend meetings of humanitarians to hear their plans and determine how best to manipulate the efforts. At the local NGO level, the Afghans have to share their lists of employees with GDI agents and even ask for permission from the terror regime before they can hire people. This allows the regime to track where aid is going and to ensure they get loyalists into the system to re-direct the aid at the distribution point.

On the beneficiary-end of the process, the terror regime is also involved. They require the GDI to review the lists of Afghans receiving benefits from humanitarians. That allows them to summon the beneficiaries to determine if they are pro-Taliban or not. If they are not Taliban collaborators, they can be stripped of their aid benefits. Many other Afghans over the last week have explained how easily aid is stolen from Afghans who oppose the terrorists and given to terrorists and their supporters.

One Afghan described in a clear example how easily the terror regime skims money off the pallets of cash arriving in Kabul. This example occurred in Balkh province and involved UNICEF funding for female teachers. When UNICEF paid female teachers’ additional salaries, the Taliban watchers simply deducted that same amount of money from the female teachers’ salaries in their regime payments. So, in essence UNICEF was just handing the cash to the terror regime. While the Taliban-Haqqani regime simply explained this theft as a way to keep the teachers below the standard salary cap, it is clearly an easy way to divert teacher salaries towards other activities.

One Afghan described the continuing UN statements that the humanitarian cash does not go to the terror regime, as baseless. He said the world needs to stop believing the UN can somehow bypass the terror regime under the current aid distribution process. The skimming of money and redirection of aid to pro-terrorist persons through various secondary and tertiary ways should lead the UN and donor nations to rethink how they provide aid to the most vulnerable Afghans.

How the Pallets of Cash also Benefit the Terror regime

Beyond the many ways the terror regime has found to get a hold of the humanitarian aid cash, there are some other ways the Taliban-Haqqani benefit from the repeated influx of millions in U.S. dollars. First, the regime is able to spend all the money they steal, raise from narcotics, and take in tariffs and trade deals to fund their terrorist fighters and radicalization centers. The Regime just waits on the rest of the world to feed their citizens. Second, the influx of cash keeps the Afghans from becoming desperate enough to overcome their differences and unify to throw off the terror regime. Finally, the constant influx of cash means that the Taliban-Haqqani regime can ensure continued engagement with UN leaders and other diplomats seeking to get the terrorists to normalize. If the world stopped their humanitarian works in Afghanistan, the non-Afghans would quickly leave the country and the economy would crater causing more insecurity for foreign investors looking to loot Afghan resources.

Since December of 2021, the UN has transported $1.8 billion in cash to keep their aid effort running, and to pay for security for their various bases—money that also likely goes to the terror regime. Yet the world is quite stuck right now. The terror regime is holding 40 million people hostage as the world tries to convince the terrorists to be nice. If humanitarian and diplomatic efforts ceased the Afghan people would suffer in horrendous ways, as the regime will simply let them starve and freeze. Afghans and humanitarian leaders should be working to find smarter ways to help the vulnerable without helping terrorists.

Intelligence
Are You Smarter Than This Terrorist?
Jason spent 23 years in USG service conducting defense, diplomacy, intelligence, and education missions globally. Now he teaches, writes, podcasts, and speaks publicly about Islam, foreign affairs, and national security. He is a member of the Military Writers Guild, works with numerous non-profits and aids conflict resolution in Afghanistan.