The time it takes to process a security clearance continues to increase, according to figures recently released by the National Background Investigations Bureau. 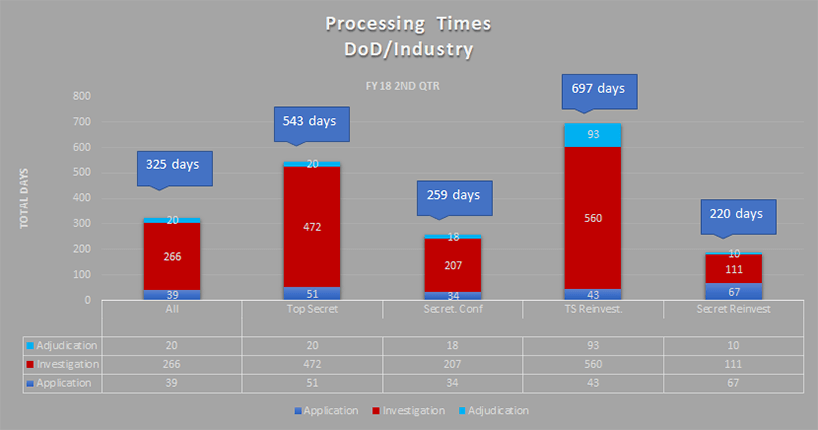 What Steps are Being Taken to Fix the security clearance Problem?

A Performance Accountability Council consisting of White House and government leaders has 11 key milestones they are working to address, including the complete transfer of the background investigations program to the Department of Defense (DoD), reducing the size of the backlog, improving reciprocity and establishing continuous evaluation.  The plan includes timelines for the completion of key reforms, but the government has a history of missing established deadlines or deleting them entirely.

NBIB Director Charles Phalen testified to the success of surging and hubbing in testimony before the Senate Intelligence Committee earlier this year. He noted that surging had been used at Wright Patterson Air Force Base in order to push through a high volume of pending investigations. The first industry hub was conducted on April 30, 2018 with Lockheed Martin in Orlando, Fla.

While these efforts appear to be making progress in niche markets, the government’s approach to addressing the backlog is more slow and steady than fast and fury. The PAC update notes the clearance backlog – which is ticking up along with processing times – is set for a 20% reduction by the end of 2018. Moving the backlog to a manageable and sustainable number isn’t set until March of 2021. That means even the government’s best guess is that we’ll be facing a sizable backlog in pending investigations for at least the next three years.

It will be working to address the backlog, implement CE, and improve processing times – all while establishing new operational structure. Unfortunately the old adage ‘there’s nowhere to go but up’ applies to process improvements in the background investigations program – but it may also appear applicable to processing times as the government looks to overhaul authority over the personnel security program.