The Department of Energy (DOE) maintained a steady state of processing time in FY22. The DOE boasts many research programs and initiatives  – many that require a security clearance. The DOE has made major improvements in timeliness this past year, dropping 21 days for Top Secret and 31 days for Secret clearances. The number of cases has also decreased in the last year by 300, reducing the strain on the system.

The chart below shows the processing times for the DOE’s Fiscal Year (FY) 2022 3rd quarter for a Top Secret and Secret clearance. 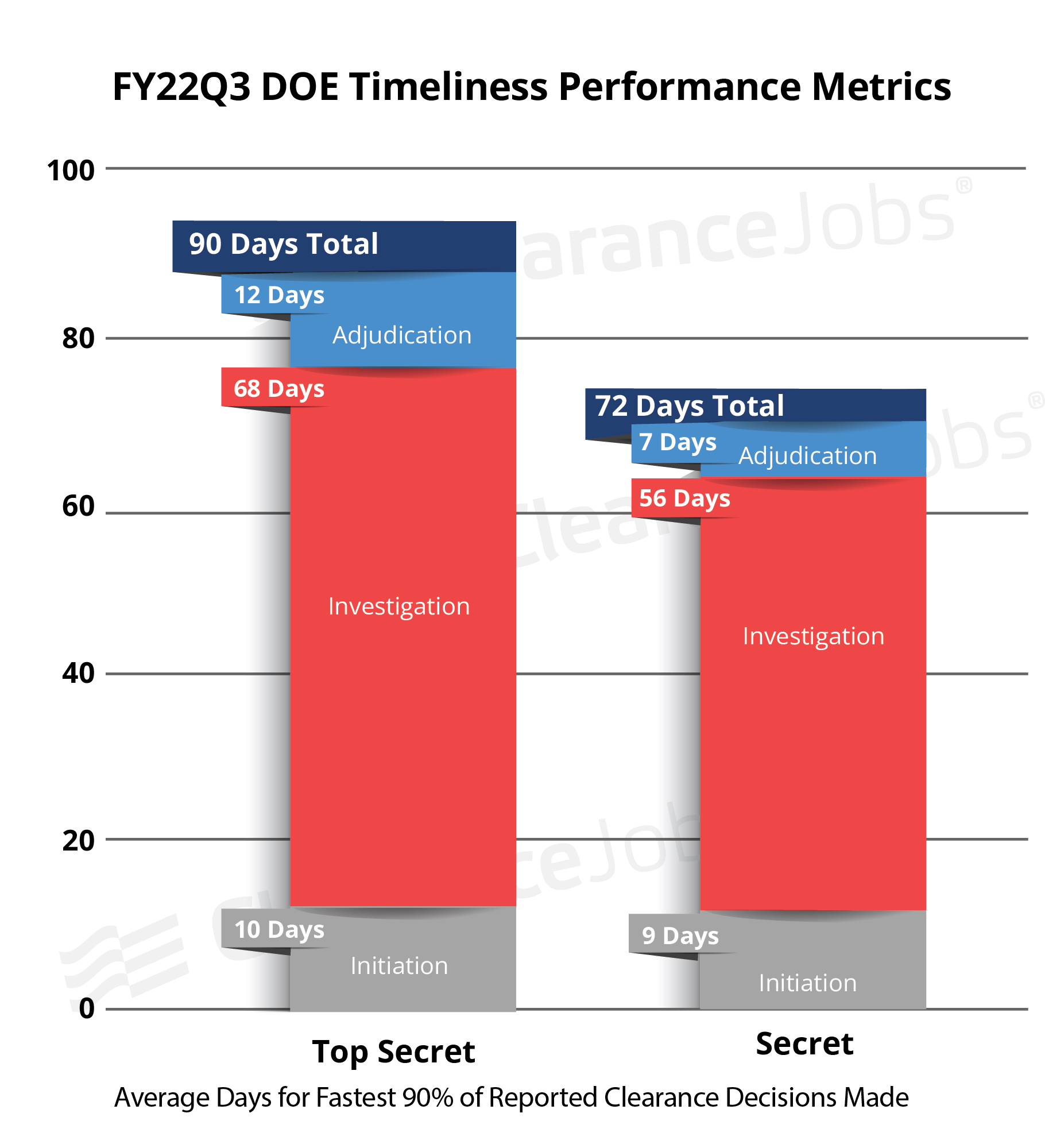 Are DOE Clearances Under DCSA?

The DOE is one of those government agencies with their own personnel security program. They even get their guidelines not from the Defense Counterintelligence and Security Agency (DCSA), but from the Atomic Energy Act of 1954, in addition to the federal adjudicative guidelines. Classification determinations and terms differ from the DoD.

While things are relatively similar, the DOE has different clearance terms like Q for Top Secret and L for Secret. Ideally, if a DoD contractor or employee should be able to transition from a Top Secret clearance to a Q level clearance – and vice versa.

It may seem confusing that DOE uses different terms. However, they say that different terms are needed because the department is granting access to Restricted Data and special nuclear material.

But just because the departments are separate, both have maintained an eye towards tightening up the clearance processing timelines. The DOE continues to reduce the number of days in the investigation phase, getting clearances out for the fastest 90% on tighter timelines. And that’s good news for companies and clearance holders ramping up a new contract with the DOE. Getting the right candidates hired and cleared has routinely required high levels of patience and perseverance.

Cybersecurity a Key Piece of the DOE Puzzle

It’s normal to only associate the DOE with topics like renewable energy and climate conversations. But aside from their role in the nuclear world and building things like the largest laser in the world, the department also has a heavy interest in cybersecurity. Where there’s energy, there has to be cybersecurity too. That’s because part of keeping America safe means protecting critical energy infrastructure against cybersecurity threats. The DOE has made recent moves to enhance their cyber infrastructure in order to protect the U.S. against adversaries.

Security Clearance
Department of Defense Clearance Processing Times
Jillian Hamilton has worked in a variety of Program Management roles for multiple Federal Government contractors. She has helped manage projects in training and IT. She received her Bachelors degree in Business with an emphasis in Marketing from Penn State University and her MBA from the University of Phoenix.